Are you in Favour of Pen Names? 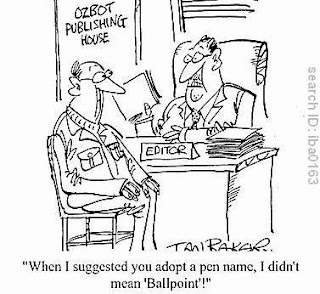 A pen name  or a nom de plume is a pseudonym adopted by an author. Its sometimes used to make the author’s name more distinctive or to disguise their gender (as in the case of J.K Rowling, her publishers were worried that boys may not read books if they realized they are written by a female), to distance an author from all of his /her works, to protect the author from retribution for their writings and for several other reasons either related to marketing or for aesthetic reasons. Most of these author’s real names were known only to the publishers.

Many times authors used pen names when their real names were likely to be confused with that of another author or a notable individual. Some authors who regularly write in more than one genre use different pen names for each. Romance writer  Nora Roberts  writes  erotic thrillers under the pen name J.D. Robb, and Samuel Langhorne Clemens used the aliases "Mark Twain" and "Sieur Louis de Conte" for different works. Similarly, an author who writes both fiction and non-fiction (such as the mathematician and fantasy writer Charles Dodgson, who wrote as  Lewis Carroll) may use a pseudonym for fiction writing.

I have never been in favour of pen names. I would always wonder why some writers adopted pen names. For me its always my full name that is a part of my byline ( for the newspaper articles) and books, and stories that have appeared in anthologies.
There are several reasons for using pen names. Occasionally a pen name is employed to avoid overexposure. Prolific authors for pulp magazines often had two and sometimes three short stories appearing in one issue of a magazine; the editor would create several fictitious author names to hide this from the readers. Robert A. Heinlen wrote stories under pseudonyms so that more of his works could be published in a single magazine.  Stephen King published four novels under the name Richard Bachman because publishers didn't feel the public would buy more than one novel per year from a single author. Eventually, after critics found a large number of style similarities, publishers revealed Bachman's true identity.

Sometimes a pen name is used because an author believes that his name does not suit the genre he is writing in. I find this reason very strange. What do names have to do with genres. A reader would pick a book depending on the blurb or review and not because he/she liked the sound of the author’s name.

Western novelist Pearl Gray dropped his first name and changed the spelling of his last name to become Zane Grey because he believed that his real name did not suit the Western genre. Romance novelist Angela Knight writes under that name instead of her actual name (Julie Woodcock) because of the double entendre of her surname in the context of that genre. Edward Gorey had dozens of pseudonyms, apparently for his own amusement, each one an anagram of his real name.

I think I am too much in love with my name to use another one for writing. What do you all feel about pen names? Are you in favour of them?  Have you ever used them? What would you have wanted as your pen name? Please share your views with us.
Posted by Rachna Chhabria at 12:00 AM