Today I have an interview with Author Himanjali Sankar, who is also an editor at a leading publishing house in India. Himanjali's latest book The Stupendous Timetelling Superdog has gathered rave reviews from children as well as adults.

Q. Tell us a little about yourself?

I was born in Kolkata many, many years back and grew up there. I did my Masters and MPhil in English Literature from JNU, which was a wonderful place to be – wild, green and free. I have been in Delhi ever since, except for a few years in the US where I watched my children grow and taught at the University of Indianapolis as adjunct faculty.

Q. What is your children’s book The Stupendous Timetelling Superdog about?

It is about a goofy dog called Rousseau who lives with two girls and their mom and has one superpower – he can tell the time with barks and thumps of his tail. This comes in very useful when the Orange Marmaladies stop all timetelling devices and Rousseau is the only timekeeper in the whole world. It is a mad and funny story and I had a lot of fun writing it. 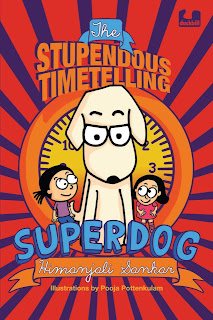 Q. How did you get the idea for your book?

It was the result of a workshop that I attended where we had to do a little exercise on Time and I came up with this fairly random idea of a timetelling dog. A year and some conversations and thoughts later, I developed the idea and it led to a children’s book.

Q. What made you write a book with an animal as the main character? Such books are a hard sell for writers.

I didn’t really think about the sales aspect – I just followed the story that grew in my head. My head is full of dogs generally. So they followed me into the book that I was writing. But there are nice and interesting people in my book too and the Orange Marmaladies from the Black Hole of Time.

Q. You are an editor at a leading publishing house. Was it difficult to switch off the editor while the writer took over?

I am an editor by day and a writer by night and on weekends. And I do not find it difficult to slip in and out of each role. It makes my life more interesting than doing just the one thing.

Q.  Being an editor, were you okay with working with another editor?

I completely trust Sayoni and Anushka’s instincts, opinions and editorial skills so that was not a problem. I would not work with an editor who I could not respect though, so I guess I would not always be happy to allow an editor to review my work.

Q. What is your writing process like? Are you a plotter or a panster?

I don’t think I am essentially a plotter. To begin with, I just wrote, with a vague idea of where I was going. I had a rough chapterisation in mind but if the story wanted to take me somewhere else I was willing to explore. I expected the plot to resolve itself which it did do to a certain extent. But it also becomes important as one moves along to make sure it all hangs together and there are no loose ends. My editor did a pretty awesome job of helping me get the plot together till it all made sense – or as much sense as a stupendous timetelling superdog can make!

Q. How do you balance your job with your writing?

I don’t find it difficult. There are enough hours in a day to do justice to both and to other stuff too – if one really wants to, of course.

Q. What are you currently working on?

I have some ideas in my head. But they are just moving around and making themselves comfortable right now. When they start clamouring and want to get out I will start writing.

Q. Any writing tips for my readers?

None whatsoever! I am not good at following rules or setting any. The only thing I do is read a lot but that is something any aspiring writer would do.

Himanjali Sankar is an editor and writer and has written two books for children, The Magical Adventures of Skinny Scribbles (Scholastic) and The Stupendous Timetelling Superdog (Duckbill Books). She is soon going to be a certified deep sea diver as well about which she is rather excited.

Thank you, Himanjali for visiting my blog.  We all wish you lots of success.

Himanjali's books are available on flipkart.