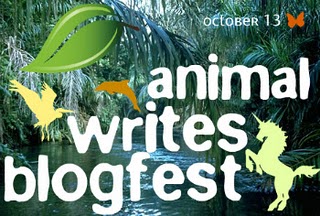 When I came across the Animal Writes Blogfest (writing from an animal's Point of View) on Dayana's blog,  I was  intrigued and interested. My first two children's books were based  on animals and  participating in this amazing blogfest would be a walk down memory lane. I eagerly signed up for the blogfest (my first one).

I chose the Royal Bengal Tiger for several reasons. Read on to discover those reasons. 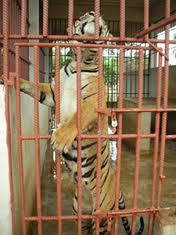 I paced to and fro in my cage, my supple body swinging with each step I took. I leapt towards the bars of the cage; “Grrrr,” gripping a couple of iron bars, I roared in frustration. I craved the freedom the jungle  offered. My mind  rewound to the day   five of us : my tigress (Lila), my three  cubs and I were at the watering hole after I had  killed  a deer;  I had stalked the deer for some time, in a split second I pounced upon it; with my sharp claws I ripped apart its belly. It was our first decent meal in months. In the last few years animal population had  dwindled rapidly  due to rampant poaching.

Eleven tigers were left in the jungle. Lila and I were extremely protective of our cubs: one of us was constantly with them.

A  noise at the entrance of my cage distracted me. A clutch of school students gaped at me. My cage attracted the maximum attention: I belonged to the species  sliding into the  endangered  category. After few years I may be a part of the  extinct species.

The camera flash irritated me. I disliked being photographed when I was not looking  my best.  My skin had lost its sheen: my stripes were no longer resplendent, there were dirt streaks all over my body, and I had lost a lot of weight. Being  restricted in a cage had dulled my reflexes. The group moved away.

I retreated into my reverie. Lila, my sweetheart  disappeared few days after I had killed the deer. Our keen eye sight and sharp hearing came to our rescue when we hunted at night. We took   turns to go hunting;  she  cuddled each cub before  embracing me to venture in search of prey; it was like she had a premonition or something. Night turned into morning  and morning merged into  afternoon. By  early evening we were sick with worry. My eldest cub assured me that he was capable  of going in search of his mother. Couple of hours passed since he had left. 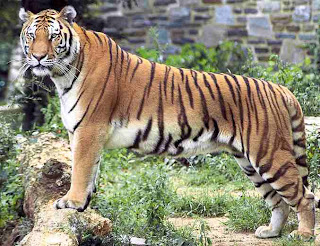 Overcome with worry I went in search of  Lila and my  cub  after giving strict instructions to my younger cubs not to stray from that place. I searched  throughout the jungle, but there was no sign of  them. Darkness had settled.  I raced back to our place.  Blood streaks strained the path: they were fresh; the blood of the  fox I had killed last week  had been washed away by the rain. I sniffed the blood; it was my own: my cubs’.  In one stroke my entire family was wiped out.

Another group of students thronged my cage. They were extremely ill-mannered. Two boys threw popcorn into my cage, their teacher chatting on a her cell phone did not stop them. A small boy threw a pebble; it hit  my stomach. “Grrrr,” I roared and leapt towards the bars. Shrieking in fright the kids shrank back and moved towards the next cage, throwing dirty looks my way.

Not one to give up easily, the next day I  ventured  in search of  my missing family; but there was no sign of them. The blood streaks were sufficient proof of their death. Loneliness swamped me. Losing one’s entire family in one sweep was not easy. I went into denial. Why us? What had we done? Didn’t my cubs deserve a chance to see what a tiger’s life was  all about? Life had been cruel to us. Tears rolled down my eyes. My cubs were babies. I had hardly spent time with them.

A plump lady stared at me. As she removed her camera from her enormous bag, I gasped. Slowly I moved  closer for a better view. She was unaware of my closeness as  she removed the lens cap from her camera. Her bag was made of tiger skin: from my dear Lila’s skin. I recognized the skin I had  lovingly caressed for years. Lila’s skin was unique; she had few  yellow spots on her black stripes. My throat felt tight. Sorrow  paralysed my vocal chords. The  cruelty and heartlessness of humans shocked me. I turned my face away. Tears rolled down my cheeks. Slinking into a corner I lay down. Memories flushed my mind. Two weeks had passed since the disappearance of my entire family. I had not ventured away from our place. But the crippling hunger pangs gnawing  my stomach forced me out  in search of a prey.

Night merged into morning, I had not glimpsed a single creature. Darkness had fallen rapidly. The smell of dead meat tickled my nostrils. Few feet ahead I saw a deer torn open. Chunks of its flesh were missing. Perhaps  another lion or a tiger  had feasted on it. I  tore a huge chunk of flesh: it tasted  funny. Unperturbed, I continued eating. After  I had reduced the deer to bare bones I sought the safety of my retreat. A full stomach is  extremely sleep inducing and within minutes I dropped into the comforting arms of sleep. I have no idea  how long I slept. When I woke I found myself in a cage: I had been transported to a zoo. On hindsight I realized that the funny taste was due to the drugs injected into the deer’s body.

The lady with the tiger skin bag continued clicking pictures of me, unmindful of the fact that I  had turned my face away. For days I plunged into  a self pity mode. One day a contingent of officials  arrived outside my cage. The sober officials clicked many pictures of me. Several vets  examined me. Gentle hands poked and prodded my body searching for tender spots. After a thorough examination  I was pronounced fit; the zoo officials were jubilant.

Had there been a threat to my life, I wondered? Were they relieved that I was not going to die? The confusion cleared when the good news was announced.

I was chosen to be  the official mascot of the  2010 Common Wealth Games India was hosting. I was christened Shera. My dark cloud indeed had a silver lining!

P.S. The Royal Bengal Tiger is the National Animal of India. It has become an endangered species due to poaching and shrinkage of its habitat.

Posted by Rachna Chhabria at 11:49 PM

Buy my book on Amazon.com

Available for pre-order on Amazon.in