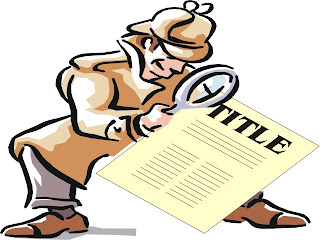 I am one of those lucky ones for whom the titles are not a trouble at all. I can happily say that the titles just jump into my head fully formed. Till date, I have never had a working title, the title that I originally conceive are the ones that ultimately sees the light of the day.

But, it wasn’t like that when I started out. My Journalism teacher in college constantly lectured me on the importance of suitable and eye-catching titles. According to her, my decent features lost out because of boring and dull titles. The titles of the first few articles and stories I wrote for newspapers were changed by the editors. I have to admit, that their titles were far better than mine. Even these lousy titles that I came up with just popped into my head.

I use to be extremely jealous of writers who came up with awesome titles. To get the tag of title savvy, I plunged headlong into the world of titles.  If other writers could emerge with shiny, interesting and amazing titles, then so could I.  In my case it would require extra effort. But, so what?

It couldn’t be that hard, I thought.  If few writers could achieve wonders with it, so could I. After that whenever I read any story/book/feature, I pondered over the title. Did it suit the story? Was it eye-catching? What made the title stand out? Slowly I transferred this detailed attention onto my work. What was I trying to tell my readers? What was the article/book all about? How could I sum up the work in few words? What was the best way to convey what I had written?  Which words correctly described my story? Had the title caught the gist of my story?

It was a tedious task, but eventually I got the hang of it. Nowadays the title trauma no longer affects me. For the past several years, the editors have thankfully retained most of my titles. In my title quest, I have learnt several things about them.

1. A title should  be like a Teaser. It should arouse curiousity. Based on the titles, readers  pick up books, or, read the articles and stories in newspapers.

2. Diving into the heart of the story to emerge with a suitable title is a great idea.

4. Popular  and catchy phrases work better than long and boring ones.

5. Titles that have Instant Recall are seldom forgotten.

6. A title should make a connection with the reader.

What about you all? Do Titles Trouble and Torment you? Do you write with working titles and come up with the final one later. Or, are you the lucky ones who come up with winners right in the begining? Do you have any title tips that you would like to share with us?

Posted by Rachna Chhabria at 12:55 AM