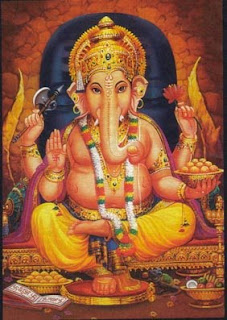 This post is about Ganesha and his symbolism  for  writers.

Ganesha is  the elephant headed Hindu God. His birth is unique: his mother:  Goddess Parvati  smeared her body with a paste of  sandalwood and many fragrant herbs. She collected this mixture and shaped it into the form  of a small boy and breathed life into it. She asked the boy to keep guard  while she went for  bath. Her husband Lord Shiva returned home after a  long meditation session.

He was shocked to see the strange boy outside his house. The small boy refused to let  the God enter. An argument ensued.  Lord Shiva reknown for his quick temper chopped the boy’s head. After  the Goddess finished her bath, she was shocked to see her son’s head on the floor. To console his distraught wife, Lord Shiva sent his  minions in search of a creature whose head they could transplant over the  boy’s neck. The first creature the minions saw was the elephant.

The elephant head was brought and Lord Shiva placed it over the boy’s neck. But his wife was not satisfied. Her argument was that  everyone (Gods and demi gods) would laugh at her elephant headed son and no one would respect him. Lord Shiva blessed the boy with a boon that he would  rule over all the Gods by being the Remover of  Obstacles. Every endeavour  had to start with a prayer to Ganesha.

Ganesha’s trunk indicates the wise person’s   immense strength and fine discrimination; an  elephant’s  trunk has the strength to uproot trees and the grace to pick up needles.  His large ears show that the wise person hears everyone.

Ganesha  has  four hands. In one he holds a lotus:  the symbol of enlightenment. In the other he holds a hatchet : symbolizing  the cutting of old karma: accumulated good and bad of past deeds get cut when enlightenment occurs. The third hand  holds laddoos: rewards of a wise life. But Ganesha is never shown eating them just as a wise man never partakes of the rewards of his deeds. There is no attachment to the deeds. The fourth hand is shown blessing people. The wise man wishes good for  everyone.

Ganesha has only one task; the other is shown broken. Perhaps this is to show that perfection is just an illusion. Ganesha is shown  with one foot on the ground and the other resting on his knee. The wise person is of this Earth, yet not entirely of this Earth. He is seated on a rat that keeps nibbling on whatever is available. The rat is a symbol of our senses, never satisfied. The wise person rides on his senses and keeps  them under control.

The entire cosmos is said to reside in Ganesha’s  large belly, held together by the Kundalini or cosmic energy symbolized by a snake. The  son of Lord Shiva: the god governing the life force and  Parvati: the earth mother,  symbolizes the spirit and body of the wise person.

Ganesha  also  played the role of a scribe, he was requested by Ved Vyasa (a sage) to write down the Mahabharata (epic) while the sage dictated.

Ganesha’s symbolism for us  writers.

The Four hands of Ganesha are   the four components of our books: setting, character, conflict and resolution. His  rat is symbolic of the distractions that trouble us. Ganesha’s foot resting on the ground symbolizes our grounding in reality and the other foot resting on the knee symbolizes our thoughts ( the stories  we create). The entire cosmos residing in Ganesha’s belly is a symbol of all the incidents packed inside our manuscripts. Ganesha’s trunk is a symbol of our inner editor  which has the wisdom to delete the unsuitable parts in our manuscripts and retain what it considers suitable. Ganesha’s  large ears symbolize the comments we hear in our writing careers.

Lets pray to the remover of obstacles to bless all our endeavours and clear   the obstacles in our paths. May Ganesha’s blessings be with all of us on this Ganesh Chaturthi. ( 11th  Sep)

If you were to ask Ganesha for one boon/blessing what would it be?
Posted by Rachna Chhabria at 12:18 AM