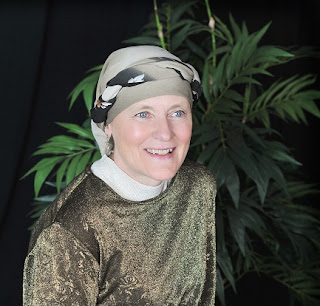 Rahma Krambo is Marketing Director for a family owned solar business in . She is active in the local arts and literary community as a member of an SCBWI writers group, and board member of the Yuba Sutter Arts Council and Friends of the Packard Library.  She is passionate about reading, writing, cats and libraries.Guardian Cats and the Lost Books of Alexandria is her first book; it blends magical realism with legendary historical events.

Q:  Tell us a little about  your book  Guardian Cats and the Lost Book of Alexandria.
A:  It's a children's book, written for middle grades and up, but it has a lot of elements that make it interesting to older readers. Some of the Guardian Cats' best fans so far are adults.
What kind of elements?
The back story is drawn from history, the burning of the legendary Library of Alexandria and is spiced with a flavor of Fahrenheit 451, one of my favorite books. Saving libraries is a passion of mine and the theme runs through the book.
The main characters are two felines with a noble purpose, but there's no shortage of fun creatures with dubious intents – gangster raccoons, an undead Queen, a hellhound, and an evil professor who believes possessing the mystical book would give him unlimited power, like Hitler's 'spear of destiny'.

Q:  Your book has  magical realism blended with historical events. How did  you  go  about researching for your book?
A:  Actually, the historical event didn't enter the picture until the fourth major rewrite. The idea came while my husband and I were on a car trip. He's one of my best critics and when I have him captive with hours of uninterrupted time, I love to bounce my ideas off him.
He's an inveterate story and history buff and I felt like the plot was missing something; that it needed a broad event or larger story to draw from. During our brainstorming session, the idea of the burning of the Library of Alexandria popped up. The fact that it occurred so long ago and there are three conflicting accounts of how it happened provided the perfect 'jumping off' point for my story. After that, it was just a matter of googling the historical stuff.
The ideas though come from another place; those you can't get from the internet.
The magical elements, to be truthful, came after I read the first Harry Potter book. I had been resisting reading them at first, because I didn't want my book to have any hint of fan fiction in them. You know, I didn't want Marco to resemble some kind of feline Harry Potter.
But a copy of the first Potter book just appeared on my desk one day and as I was reading it, I saw how fun it was to have characters go through portals. This was an element I could easily add I thought, and so when the elder Guardian has to explain to our young hero about the importance of the book they are guarding, he takes him time traveling back to . Alaniah, their angelic guide came into being, as well as supernatural creatures from the dark side.  The magical elements didn't require much research. They just seemed to appear, like magic. 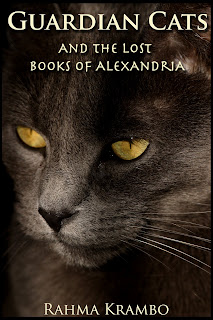 A:  This is a favorite subject of mine and it was one of the first things I studied when I started my book. Archetypes are not stereotypes. I think of them like the 'bones' of a character which I can then dress up in whatever clothes I choose.
I knew about Protagonists and Antagonists of course, but I learned how the other archetypes are like assistants to the MC; how each one has a part to play in the development of the Protagonist's growth.
The Threshold Guardian is particularly interesting because he/she creates trouble for the MC and may seem like the Antagonist.  However, their real purpose is to test the MC to see if he or she is ready for the next level. You can disguise the Threshold Guardian so the reader isn't quite sure what he's up to, thus adding an element of mystery and surprise to the story.
Then there's the who offers much needed advice to the Protag. One of my favorites is the Trickster, who appears appear clownish and silly, and can be used to lighten a somber mood. But the Trickster can have a more serious role, much like the court jester, who appeared to be a fool, but was often seen as divinely inspired and given large leeway to criticize the royalty for their own benefit.
Actually, each of the archetypes represent an element of the Protagonist and have a definite role to play, but they aren't just props. They can also have their own character arc.
Archetypes are also a wonderful way to examine the different elements of our own human nature and life experience.

Q:  You also mentioned getting an external editor to edit your book. Did you find working with an external editor easy? Do you think it’s important to get an external editor before a writer submits a book?
A:  In answer to the first part of your question, I found my editor, Jennifer Baum of Scribe-   Consulting great to work with. She was professional and easy to communicate with. Her editing was top-notch and exactly what I'd asked for, which was a line-by-line edit.
hen I got my manuscript back from her, at first glance I figured it might take a month to go through all the changes. In the end, it was more like four months. I wanted to share that so writers know that if they want a good 'end product' they have to be in it for the long haul. And take time with each part of the process. Some of those can be really, really tedious. I thought so many times I was done, because I wanted to be done, not because I was completely at peace with it. That's why it took four years, countless revisions and a patient husband who quit asking me when I was going to be finished with my book.
I made the edit changes Jennifer suggested and I sent it back to her for another go around. I knew what I was doing, that it would extend my 'due date' out further. The birth of my book would have to wait, but I believe it was worth it. If you want your book to be as professional as possible, having an external editor is critical. As much of a skin flint as I am, I had figured there would be some costs involved in publishing and I knew this was not the place to cut corners.

Q: You created a publisher imprint- Reflected Light Books to  publish your book. Any particular reason behind creating the publisher imprint?
A:  Yes. Getting a publisher's imprint is fairly easy, it means you are thinking like a professional. It's so easy to self-publish these days, but it's not easy to be professional. It means taking yourself seriously as a writer and seeing that you have a future you want to develop. Without it, your books appear as being published under your own name, which a lot of authors do and is perfectly fine. But kicking it up a notch was something I wanted to do. I came up with a name I liked and thought would encompass the type of books I might write in the future. I bought the domain name and used it to buy a block of ISBN numbers.

Q:  What is your writing process like? Are you a plotter or a panster?
A:  [laughing]I love the image these words invoke. I think I'm a bit of both now, but in the beginning I was definitely a panster. I had no idea where I was going when I decided to write a book, but I gradually developed a way of structuring that kept me from veering too far off the plotline. Then regularly I would stop and analyze it, and see where it wasn't working or the weak spots were.
I used index cards extensively, so I'd throw them up in the air, let them land and see if the new order worked. Just kidding.
Actually what helped most was putting a large storyboard on my wall and pinning the index cards on it. Having it visible in this physical way, instead working completely on the computer, helped immensely, because it's really easy to get lost when there's so many things going on.

Q:   Is Guardian Cats going to be a part of a series? Is a sequel in the pipeline?
A:   Yes! It's not exactly a sequel in the normal way. The second book has the same setting, and some of the characters get to appear again. But I really wanted to write from a human perspective this time and so the second book is seen through the eyes of a young boy. I can't wait to get back to a normal writing schedule.

Q:   Do you have  a favourite writing craft book?
A:   Books I keep chained to my desk when I'm writing are: The Writer's Journey by Christopher Vogler, Plot and Structure by James Scott Bell and Self-Editing for Fiction Writers by Browne & King.

Q:  Any writing tip you would like to share with my readers?
A: Write every day. Write gibberish until real words emerge.Write with the love of saying something old in a whole new way.
Thankyou, Rahma, for the interview. We wish you lots of success with your book. One lucky commenter will win a Ebook copy of Guardian Cats.

Posted by Rachna Chhabria at 12:21 AM