Potholes to Avoid While Writing 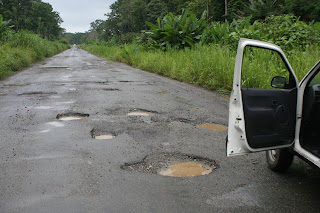 For most of us writers, our first drafts are bloated and full of errors. That should not be a cause for worry as first drafts are all about getting a story out on paper. If we worry too much, it can affect the flow of words. And we all know that first drafts are reworked upon several times until the manuscript shines.

There are certain traps we can avoid  when  working on our second, third and consecutive drafts.

1.      Weak Characters. This is one of the major flaws editors and agents can pinpoint. Characters who do not contribute much to the movement of the plot and Characters that do things without a justification can seriously hamper a book’s prospects. Strong characters, whether they ultimately succeed or not, drive the plot. The readers are watching the character’s every move. They are aware that the character is trying. Underdeveloped characters can be a major irritant. When a writer has not tapped the true potential of a character/s, readers are definitely left with a feeling of being cheated.

2.      Coincidence. Though coincidence is unavoidable in fiction, but an excess of it will soon provoke incredulity. Coincidence must be treated with caution and should never simply be a cheap and easy way to resolve a dilemma or conflict within the plot.

3.      Serendipity. Serendipity can be delightful. Too much of it will become syrupy and syrupy on any page of fiction tends to make things sticky and can be a huge turn-off.

4.      Chunky dialogues. Dialogues are an important part of writing and can definitely make or break a story. To get the dialogues right, we should subtly eavesdrop on conversations. A lot can be learnt just from listening to conversations. People seldom answer each other directly, but manoeuvre to steer the conversation back to their own agenda. Dialogues can be vital to give clues about characters. We can understand a lot from the way people talk.

5.      Descriptions. Descriptions are a wonderful way to explain things, people and places in our stories. But an information overload can seriously overwhelm readers. Descriptions that gently creep up on readers taking them by surprise is always an asset.

6.      Language. Words are always a writer’s asset. If clichés and the often used metaphors are avoided and replaced with new and unusual way of describing things, it works to the advantage of a story.

7.      Lame Endings. Endings that do not resolve the major conflict/s in a book and endings that have just popped  up out of the blue are major disasters that every writer should consciously avoid. Writers have to move towards the ending  by dropping few hints and foreshadowing a little about it earlier in the story.

What according to you all should writers avoid while writing. What do you feel turns off readers? What upsets you in another writer’s story?
Posted by Rachna Chhabria at 12:00 AM