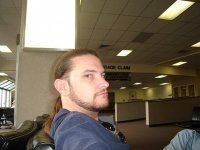 Patrick Johnson, pen name SB Jones, is the self published author of The Eternal Gateway series.  He comes from a strong technical background after working for Dell Inc. for eight years and a regular attendee of the DefCon hacker convention.

Tell us a little about the Eternal Gateway Trilogy.

The Eternal Gateway Trilogy centers on a once hidden artifact in the jungle that allows certain worthy people to see and travel to the past or future.  I use a mix of light steampunk: airships, gunpowder tech, trains and mega cities.  Traditional high fantasy: magic, swords and sorcery.  And science fiction: time travel, and physics.  The first novel, Requiem, is a classic hero’s journey of the main character going from the ordinary to the extraordinary.  Guardian takes place five years after the events of Requiem and is a much darker, emotionally charged novel that the characters have to deal with the harsh realities of war.  The fun adventure is over, it’s real now.  The final book, Sentinel, is where everything comes together.  The time travel elements will have you reaching for books one and two again.  Redemption and revenge are the main themes as everything comes full circle.

Where does inspiration for your characters and stories come from?

Most of the characters come from decades ago pen and paper roll playing games created from grade school through high school.  Some started from video games, movies, or TV shows.  For example, Kail and Angela were characters from the pen and paper games, while the airship captain, Camden Arland, I tried to model after LOST’s Sawyer.  As I wrote Requiem, I just wasn’t able to make into a grumpy guy that hated that he had to do the right thing.  My editor says he reminds her of Jack O’Neill from Stargate.

Do you have any advice for aspiring authors trying to create a trilogy? 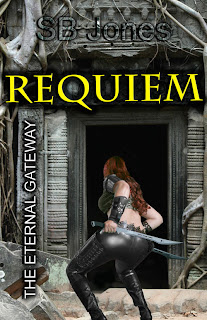 Plan, plan, and plan some more.  As I learn and become more experienced with writing my views change a lot.  A big part of me wishes that I had not published Requiem until the whole trilogy had been written.  I am almost finished writing book two and there so many details that I could go plant seeds for in book one that have cropped up.  I know deep down the trilogy would be better for it if I had waited.  But at the same time, if I had not released Requiem, all of the feedback, comments, and people asking me when the next book comes out, seeing people smile and shaking hands at book signings would never have happened.  Without that, there is a very good chance it would never have been anything more than a rough draft and an outline.

Being a regular follower of your blog, I have realized that you are a serious plotter and outliner. Can you tell us about your plotting method?

I like to start with note cards.  I put chapters or scenes on them and lay them out on my bar.  It’s nice because you can easily move them around until you get the events the way you want.  It helps eliminate plot holes or giant gaps in events.  Regardless of what you do, things happen that you did not plan for so it needs to be flexible enough that you can adjust and not have to go back or redo work.

Did you try the traditional publishing route or did you go straight into the self-publishing way?

Honestly I intended to go the traditional route first.  I wrote 5 short children stories called Stan the   My plan was to get Scholastic to pick them up and use that success and money to fund the time while I worked on The Eternal Gateway.  That never happened I just shook my head at the whole query, agent, wait two to ten years for an answer business.  Without an artist or publisher, Stan the Man was shelved.  When I was in the first rounds of edits for Requiem, I heard about Amanda Hocking.  It’s easy to guess where things went from there.

You have said that “One of the nicest thing about being self published, is the fact that your success is directly related to the effort you put in.” How are you going about marketing your book?

Marketing is a topic that will never end.  I think what most self published and even traditionally published authors fail to realize until they are in the middle of it is this.  Writing/story telling is an art.  Publishing is a business.  A lot of authors throw their work up expecting hundreds or thousands of people to buy their book.  When it doesn’t happen by next week, they blame Amazon for it.  A lot put in time and effort to blog, tweet, and Facebook all day, but still fail to sell.  When you look at these authors they are doing a good job marketing to their peers, not their customers.  Great, you have 500 followers, but they are all other authors.  Look up @day9tv on twitter.  71,000+ followers.  Those are all fans, not other internet tv hosts.  Blowing a $100 for a Google ad for a weekend isn’t going to work.  You are better off buying $100 worth of your own book and giving them away at the mall.  The majority of my success has been from getting myself out there.  Book signings, shaking hands, small talk to the person behind you at the checkout line.  And always, always have something on you to give people.  A business card with the cover and information to buy the book.  I have sold more paperbacks and eBooks this way than from blogging, tweeting, and posting on forums.  Don’t neglect these, because they will with time generate sales.  It can take years though for it to happen.

What have you learned about marketing your first book? How will it influence your marketing strategy for your next two books?

I wouldn’t call it a mistake, but I launched Requiem on Monday June 20.  The next day Bantam Books dropped like 140 back listed Star Wars books on Amazon.  When you checked to see what was new in science fiction my book was instantly shoved 10 pages deep.
Coordinating sales is something I am going to try with Guardian.  It doesn’t take many sales to push your Amazon ranking up the charts.  For example if 50 people buy your book spread out through a month, your ranking will be much lower than if you had those same 50 sales in a day or two.  So planning with friends, family, and generating presales and letting people know well in advance when it goes for sale is very important.  Hitting a top 100 subgenera on Amazon is very important for sales.
Last is picking a better launch date.  I have read several times that launching around holidays that have gifts are ideal over random days.  Christmas, Mothers Day, Fathers Day etc are better than mid July or late September.

How do you manage writing, marketing, blogging, as well as publishing your books? Is there a secret time management skill you would like to share with my readers?

There is no secret.  People have heard this one before.  I treat it like a job.  Tuesdays are my online marketing days, I rarely get any writing done now on Tuesdays as I make the blog rounds, post comments, post a blog, hit the forums, find new blogs, tweet, Facebook and everything else.
The other weekdays, I write.  I get started around 10am, check emails, do a quick look through Google Reader to see what’s new in blogging.  If there are new blogs from certain people, like yours Rachna, I will read it and leave a comment if I can.  Once noon hits, I shut it all off, turn on some music and start writing.  Getting rid of distractions is very important.  It’s all to easy to check your Amazon ranking, email, wander to a forum, browse twitter and find that 3 hours have passed.
My advice for people who don’t have the luxury of being a full time writer is you have to make time.  Writing is a skill, it needs to be done over and over, like exercise. Even an hour a day if you can get in 500-1000 words, you can have a full length novel in 3-4 months.  Nothing will get the book done other than butt in chair.

Do you have a favorite writing craft book?

I don’t.  I don’t have any books on how to write.  I use Google a lot to look things up when I get stuck or I ask my mother who is a retired school teacher.

Thanks Patrick for giving us a peek into your creative process.

Patrick’s blog www.TheEternalGateway.com
Twitter as @starbuck_jones.
Requiem can be found in paperback and eBook at Amazon and Barnes and Noble.
Amazon:  http://www.amazon.com/dp/B00572MWYS
Barnes and Noble:  http://www.barnesandnoble.com/w/requiem-sb-jones/1103851384
Posted by Rachna Chhabria at 12:00 AM